The working car engine generates the data of several systems. The information cannot be read directly by the ECU. They must be converted into electrical signals that the electronic control unit can recognize. Car sensors do this work. They convert the light, electricity, temperature, pressure, time and other data into electrical signals, then input them into the ECU to calculate and analyze, then check the working state.

The electronic control unit (ECU) is the core of the entire automotive sensor system. Many types of sensors relate to temperature, pressure, position and speed, flow, oxygen, detonation, etc.

These sensors send the information to the ECU. The ECU calculates and controls the data precisely to enhance the engine power. It makes sure to carry out the fault detection, reduce the fuel consumption and exhaust emissions. 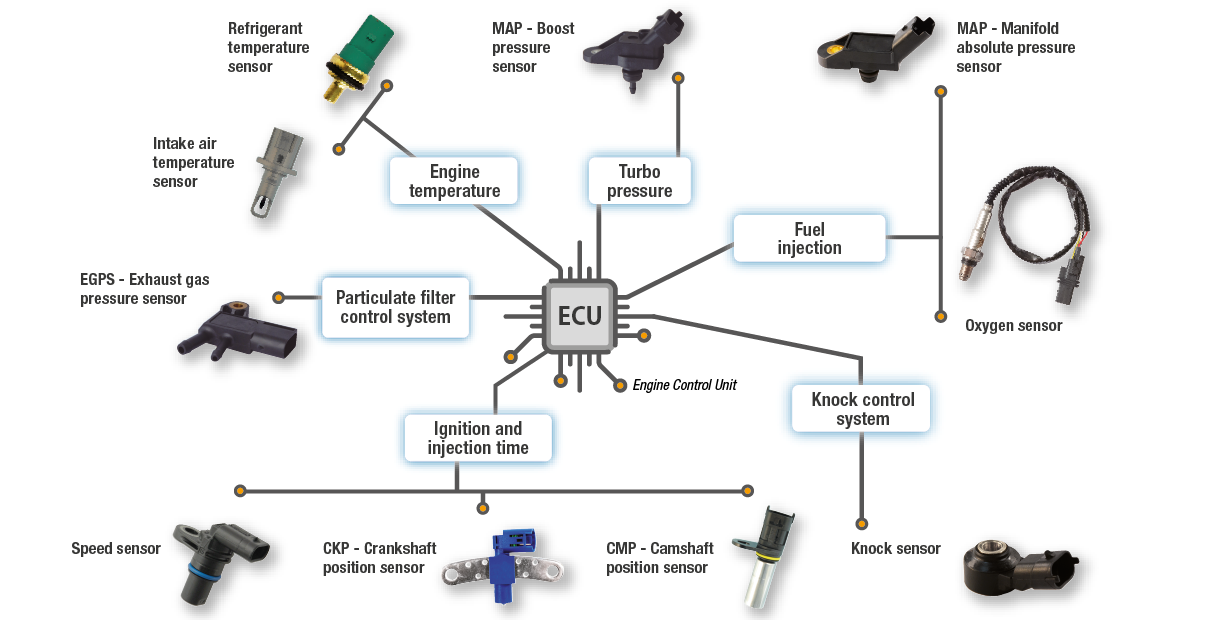 The engine works in high temperature (up to 150 ℃ on the surface, 650 ℃ in the exhaust pipe), vibration, impact, dampness (100% RH, -40 ℃ -120 ℃), steam, salt spray, corrosion and oil sludge and other harsh environments. The engine sensors must be durable. They have one or two more ranks of the technical index than the typical industrial sensors. Accuracy and reliability is most critical. The engine is difficult to work correctly without these two factors.

There are three main types of temperature sensors: wire-wound resistive, thermistor and thermocouple resistive. They have their characteristics and applications.

The piezoresistive pressure sensor is sensitive to temperature. It requires a separate  temperature compensation circuit. It allows mass production.

Karmen vortex MAF sensor has no moving parts. It works with high sensitiveness and accuracy, needs temperature compensation too.

Hot-wire MAF sensor is with high accuracy, no temperature compensation need. It is susceptible to gas pulsation, easy to get an open circuit.

Hot film MAF sensor has the same working principle as the hot-wire MAF sensor, but less volume. It keeps the cost down and allows mass production.

According to the signal formation principle, the crankshaft position sensor has three major types: electromagnetic, photoelectric and Hall effect.

The throttle position sensor detects the opening angle and opening rate of the throttle. It converts the message into a voltage signal, then sent to the engine computer. The signal is the primary regulator to control the injection pulse width, ignition timing, idle speed, exhaust emissions. It's also an auxiliary signal to the manifold intake pressure sensor.

The throttle position sensor is a variable resistor, contains a sliding contact arm that connects to the throttle shaft that slides around a resistive material set by the shaft of the movable contact.

The analogous throttle position sensor is a three-wire sensor. The first wire supplies power to the sensor resistive material from a 5V voltage drawn from the computer power supply. The second wire connects to the other end of the resistive material provides a (negative) ground for the sensor. The third wire connects the movable contact of the sensor, provides an output signal to the ECU.

The movable contact tests the voltage at each point on the resistive material. The voltage is proportional to the throttle angle.

The throttle position sensor consists of two switching contacts. When the throttle is in the idle position, the switch is in the closes. The idle speed input signal terminal of the engine control computer grounds.

The primary electronic component of the zirconia oxygen sensor is a unique ceramic body fixed in the retaining sleeve with mounting threads. The zirconium tube equips with a gas-permeable platinum electrode on its surface, with a guard tube and a wire connector.

At higher temperatures (above 300°C), oxygen is ionized. Suppose the oxygen concentration measured inside the ceramic body (atmosphere) and outside (exhaust gas) is different.

In that case, a voltage drop produces on the surface of the two platinum electrodes, with a high potential on the side with high oxygen content.

When the mixture is lean, the exhaust gas contains more oxygen, the concentration difference between the two sides is small, generates a small voltage; conversely, when the mixture is rich, a high voltage develops according to the measured voltage value.

It is possible to measure the oxygen content on the outer surface of the oxygen sensor, and the oxygen content in the engine exhaust emission mainly depends on the air-fuel ratio of the mixture. If the sensor is defective, there are several test methods to check and repair.

Therefore, the ECU analyzes the combustion condition of gasoline according to the electrical signal input from the oxygen sensor to correct the fuel injection in time so that the air-fuel ratio is in the ideal situation, λ=1. So it is also called λ sensor.

The knock sensor detects whether the engine ping occurs during the combustion process. The sensor sends the knocking signal, a crucial reference signal to correct the ignition advance angle, to the engine computer.

The piezoelectric knock sensor is typical. It settles on the cylinder block. There is the  piezoelectric effect on the crystals or ceramic polycrystals. The sensor shell equips with piezoelectric components / counterweight block and wires.

The working principle is that when the engine cylinder block vibration is transmitted to the sensor shell, there is a relative movement between the body and the counterweight block. It squeeze the piezoelectric element and counterweight block in the middle, change the output voltage signal.

The control component can only detect the voltage formed by 7000 HZ vibration. We judge the intensity of the knocking in terms of the voltage. Then postpone the ignition time to avoid the engine ping.

The working principle of the magnetostrictive knock sensor is that: when the engine cylinder block vibrates, the sensor resonates with the engine at about 7000 Hz.

The permeability of the solid magnetic material core changes so that the flux density of the permanent magnet that goes through the iron core also changes.

The induced electromotive force generates in the windings around the core. It sends the signal into the ECU.

A faulty knock sensor causes many problems: the engine ping, ignition timing be out of alignment, the fuel consumption increases, and the power decreases.

Of course, there are extra sensors on the engine. It is like the information our eyes, ears, nose, skin feel is converted into electrical signals, transmitted to the car's computer system so that the engine can make the correct judgment.

This process makes the better driving. With the progress and development of technology, the sensors on the engine will become more and more intelligent.

June 03, 2021
Recommended Reading
Development of Automotive Ignition Systems The starting system Vehicles Hard to Start in Winter: Reasons And Maintenance How to diagnose a faulty fuel pump What You Need to Know about Automotive Engine
Updated Products