As people's requirements for automobile power, safety, comfort and economy continue to improve, more and more electric devices are settled on the car. Correspondingly, the requirements for alternator capacity and performance indicators are getting higher and higher.

The three-phase winding of the alternator stator are arranged in the stator slot according to a specific pattern, 120° apart in turn.

The magnetic field is generated when the external circuit energizes the excitation winding through the brush. The magnetic lines of force start from the N pole. They pass through the small air gap between the rotor and stator, then go into the iron core, and finally return to the adjacent S pole through the air gap.

When the rotor rotates, the magnetic flux alternately changes in the stator winding. According to the principle of electromagnetic induction, the three-phase winding produces an induced electric potential with the same frequency, equal amplitude and 120° phase difference (three-phase alternating current). The current is then turned into direct current by the rectifier element composed of diodes.

The conversion of the alternating current generated by an alternator into a direct current is called rectification. Automotive alternators are excited in a different way compared to those for the general industry. They are other-excited at first and then self-excited.

The remanent magnetism of the alternator rotor is weak. The alternator can only generate electricity by self-excitation at a higher speed.

As a result, the alternator for permanent magnet vehicles needs an external DC power supply. The battery provides an excitation current to enhance the magnetic field so that the voltage rises quickly with the alternator speed.

The power is generated by other excitation at low engine speed. When the speed is increased to about 1000 r/min, the excitation current is then provided by the alternator itself. That's self-excitation.

At this point, the value should be approximately 13V or higher. The alternator is in good condition if the voltage fluctuates between 13-14V due to different speed changes. On the other hand, if the voltage stays the same or drops, there must be some issues in the alternator.

●  Start engine and stop after a few minutes

When the bearings are worn, or the insulated copper windings are damaged, the alternator will get too much heat, which results in rapid failure.

●  Turn on radio and start engine

If the alternator is faulty, the radio will make a strange noise. The sound quality will deteriorate. You should pay attention when this happens.

There are more apparent symptoms if the alternator is bad. The car will experience several battery cuts. And you won't start the car by electric ignition.

●  Turn on headlights and check brightness

When you start the car, the lights will dim, and the car starts. Check the headlights' brightness first, then the brightness of the gas pedal.

If there is no significant difference between the lights before and after starting, the alternator isn’t working. The great contrast of brightness indicates a good alternator. 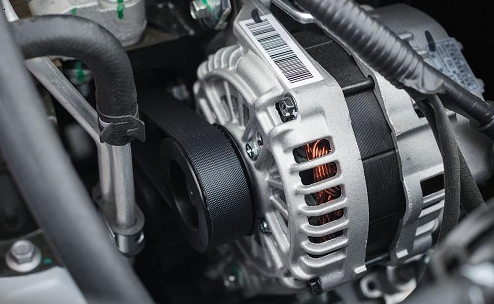 The carbon brush is a crucial component of the alternator. It must be installed correctly when repairing so as not to cause insufficient power. Poor contact between carbon brush and rectifier may lead to sparks and even issues like no power.

The rectifier surface should be kept clean. It should not be stained with oil. Otherwise, it affects power generation.

Carbon brushes installed in the frame should be flexible and reliable. If there is a jam, it's OK to grind with fine sandpaper.

The lack of power due to diode breakdown, poor contact and reverse polarity can be tested with the multimeter. If necessary, get it replaced or repaired.

The worn parts must be replaced if the lack of power is caused by poor installation, deformation of the rotor shaft, and coil ablation.

When we install the diode, the tightness should be appropriate. Too tight diode will be easily damaged. If it's too loose, the energy transmission efficiency decreases.

When installing and replacing the battery, keep the negative lap strictly. The polarity must not be installed in reverse to avoid diode burnout. Each terminal cannot loosen. Otherwise, poor contact or transient overvoltage can damage the component.

The alternator should be maintained regularly according to the technical specifications. The problems should be promptly overhauled and removed. Keep the alternator and regulator wiring intact.

It’s a disaster that there’s no electricity when we turn on electrical equipment. As the most important component in the charging system, the alternator has to provide sufficient current and voltage at any time. Delcoribo produces qualified alternators that meet rigorous standards.

Why do our products have such good durability and performance? We strive to take everything seriously, from raw material, manufacture, marketing to delivery. Quality management is the top priority. Our engineering team ensures that all the parts pass strict tests. Every alternator has long service life to resist tough environment, such as vibration and friction.

Everyone is looking for good alternators to rescue their electrical equipment. Replace a new one from Delcoribo, and enjoy driving without electric issues.

Signs of A Bad Battery (Tips for Buying Good One)
Charging System: Working Principle And Corrective Maintenance
What to Do After Getting A Used Car
Prolong Service Life: Replacement And Maintenance of Automotive Battery
Everything You Need to Know about Voltage Regulator (Case Analysis)