How does the starter motor work

A starter motor is an electric motor using gears to start the engine. The working principle of the starter motor can be explained by the working principle of its main component, the DC motor. The DC motor is a device that converts electrical energy into mechanical energy,  a charged conductor is subjected to electromagnetic force in a magnetic field. In fact, because the torque produced by a coil is too small and the rotation speed is unstable,actually many coils are wound around the motor's armature  and the number of commutators increases with the number of coils. This ensures a large enough torque and a steady speed.

An automobile starter motor is usually composed of three parts: Series motor.Transmission mechanism; Control device (also known as solenoid switch). Dc series motor is the power components, generating torque, it includes a rotor assembly, a stator assembly and a brush assembly. The transmission mechanism transfers the power of the DC series motor to the gear ring of the flywheel through the drive gear, in order to complete the passive rotation of the engine, and then makes the pinion and the gear ring of the flywheel separate after the engine starts. The control section is used to open and close the circuit between the motor and the battery. 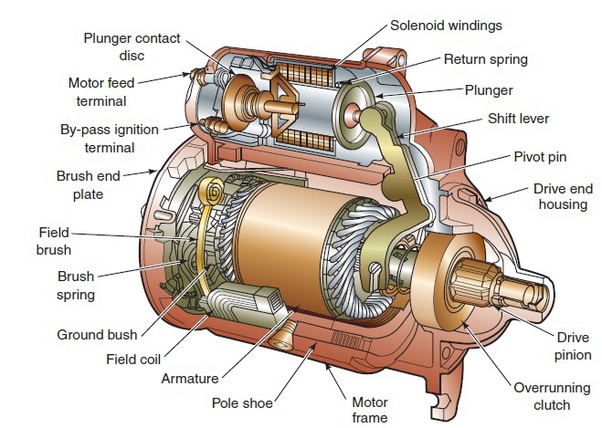 The daily inspection of the car starting system

The starting system has its own fuse and relay. If starting the system does not work properly, check the working status of the fuse and relay after troubleshooting the battery. Damage to the fuse can be tested with a multimeter. The coil of the relay can be detected by the ohmmeter of the multimeter. It can be detected whether the relay contact is in good closed state by electrifying both ends of the relay coil. Fuses and relays are vulnerable component in circuits of starting system. They are also easy to test. If has abnormal phenomena, starting from simple to complex inspection methods, fuse and relay must be used. Of course, there are many ways to tell if the relay is good condition. It can be determinate by means of replacement, touch, etc, but ultimately it must be verified by a multimeter.

The starter motor component may be the failure point of the starting system. It rarely disassemble in the process of practical maintenance for the control device, transmission mechanism and the direct current series motor, especially the stator assembly and winding of rotor assembly of the DC series motor. The reason why we don’t suggest you to repair the faulty starter motor, because of the cost, it will kill your time and costs your money more than shop a new one.

After the starter is connected to the circuit, the starter completes its function. If the battery fuse, relay, and starter are in good condition, check the starter circuit of the starting system. If the starting system is unable to function normally. We should focus on the problem of open circuit, short circuit and connection between the wire and components. In practice，the Poor contact the main cause of the failure.