when turn the ignition switch to the 'on' position, the starter motor does not work properly.

In this case, we troubleshoot the failure based on the specific conditions. Because there are many reasons why the starter motor does not work, failure of any part of the starting system will cause the starter motor failure. We generally summarize it as the following reasons.

(1) The battery is insufficient in power, which cannot be converted into mechanical energy after starting the engine, unable to drive the operation of the starter motor.

(3) It is also possible the relay failed in the starting system.

In the cause of the failure, it is necessary to troubleshoot the fault, so that the starting system can work normally as soon as possible.

The normal troubleshooting procedures are as follows:

First of all, check the battery. If the battery is low, it indicates that the failure of the starter may be caused by this reason. You can replace it with a new battery.

In addition, if the fault still can’t be removed after following the steps above, the starter motor is not running, then check whether any oxidation is on relay contact. If the contact gap is too larger, and hard to close, it will cause the circuit failure, you must carry on the corresponding adjustment of the relay contact clearance, make sure the starter motor works normally.

After starting the car, the engine starter can run, but it is obviously weak.

Symptom: switch on the starter switch, the starter operation is stuck or stagnant or slow. The starter is weak in operation, indicating that the load capacity is reduced and the actual output power is reduced.

The reasons for the failure are as follows:

B. The contact resistance of the main circuit starter has increased, resulting in the working current of the starter in decline. The reasons for the increase of contact resistance include: the wires leading from the battery to the starter motor are in poor condition and the wires aren’t fitted correctly. The contact between the starter solenoid switch and the contact plate is bad contact. Excessive wear of brush bar causes excessive reduction of brush spring pressure, which leads to poor conductivity of brush and commutator.

E. Too tight engine assembly or low working environment temperature may cause large starting torque, or the starter can't run.

B. If the battery and wiring are in good condition, it indicates a fault with the starter. The cause of this fault is mostly caused by bad contact of battery or circuit. In the event of such a fault, the following routine elimination should be performed.

Third, if these parts are found to be free of problems through the above detection and troubleshooting, the possibility of the above faults can be basically eliminated. Then check the starter's bearing, if the bearing is bent or too tight, the faults we mentioned may also be caused.

3. The starter is running continuously

Through the above analysis, it can be seen that the occurrence of circuit failure of the starting system may be caused by a variety of reasons. When there is a fault, it is necessary to remove the factors that may lead to the fault, so as to determine the cause of the fault as soon as possible, then troubleshoot it. 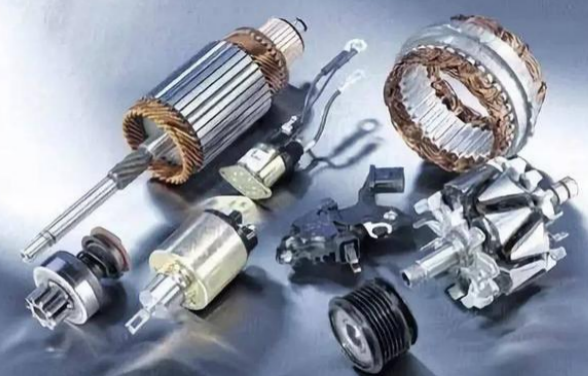 4. When turn on the ignition switch, the starter motor doesn’t run

Symptom: turn the ignition switch to the 'on' position, the starter does not run.

A. Battery itself is severe deficient. The joint of anode and cathode of battery is loose or other grease stains cause bad contact or the battery internal damage.

B. There is a fault in the ignition switch itself or in the starter relay.

C. The two contacts of the starter solenoid switch are severely ablated, resulting in poor contact between them, or the contact plate cannot connect the two contacts due to improper adjustment.

E. Excessive wear of brush carbon rod causes excessive reduction of brush spring pressure, which leads to poor conductivity of brush and commutator. The brush is stuck in the brush frame and cannot contact the commutator, and the circuit of the brush is connected is faulty.

G. The armature core cannot be rotated normally due to excessive wear on the armature bush.

C. Determine whether the fault is in the starter or control circuit. Turn the ignition switch to the starting position, and a test lamp (or a multimeter) can be used to check whether the terminal voltage of the starter is normal. If it is normal, it indicates the starter has an open circuit, short circuit or ground, and the starter needs to be removed for further maintenance. If it is abnormal, there is a fault in the circuit between terminal and the positive pole of the battery.

A. One-way clutch fails and slips.

B. The starter was started too early.

C. The drive gear or flywheel gear ring of the starter is damaged.

D. The travel of the solenoid switch is too short. The drive pinion cannot engage with the flywheel gear ring.

Turn on the starter switch, then check the idling starter. There are two situations:

The first one is caused by the malfunction of control mechanism of the starter, that is, the drive gear of the starter does not engage with the flywheel gear(pinion).

The second is the gear ring of the flywheel gear has engaged with the drive gear of the starter, and the starter idles because of the slip of the one-way clutch.

B. Check whether the drive gear or flywheel gear ring is damaged. If damaged, it needs to be replaced.

6. The starter sends out clicking noise

Symptom: when the ignition switch is turned on, the starter's moving iron core creates a continuous reciprocating motion sending out clicking noise.

A. Damage to gear ring of starter or flywheel.

C. Starter relay contact is disconnected or the voltage is too high.

Check whether the starter's set screws are loose or the clutch housing is loose, and whether the meshing gear pair is overworn. If all are normal, the battery voltage can be tested with a multimeter. When starting the engine, the battery voltage shall not be lower than 9.6V. If the voltage value is too low, it indicates the battery internal damage or power deficit is serious, it should be replaced. If the normal voltage value, indicates the battery performance is in good condition, when switching on the starter switch, there is clicking noise, indicates the holding coil of solenoid switch is not properly grounding and the short circuit, or the disconnection voltage of the starter relay is too high. If the solenoid switch and the starter relay are repaired or replaced respectively, the fault can be eliminated.