The circuits (or whole vehicle circuit) is based on the automotive electrical system (including the power supply system, starting system, ignition system, lighting and signal system, instrument and alarm system, electronic control unit and auxiliary electrical appliances, etc.) of the working characteristic and the correlation between each system, using equipment such as fuse, switch and wire connection of a whole circuit. Figure as below, shows the distribution of electric components in the Volkswagen Golf. 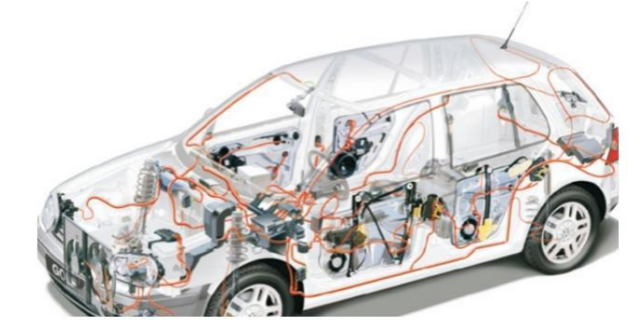 The starting system consists of a starter and a control circuit, which is used to start the engine. As shown in the figures below.

The instrument and alarm system mainly consists of a combination of instruments (including fuel meter, water temperature meter gauge, speedometer, engine tachometer, etc., as shown in Figure below, sensors, various alarm indicators and controllers. Its function is to provide the driver with various parameters and abnormal conditions of the car to ensure the normal working of the car.

Automobile circuit is the same as the general circuit,  the circuit is in series, parallel or mixed mode between the electrical appliances. It has three basic working states: current path, open circuit and short circuit. Each electric appliance in circuit diagram adopts special symbol or diagram frame with annotation text. But the automobile circuit has some characteristics of its own.

In order to prevent wiring harness and electrical equipment from burning out due to ground or short circuit, automobile circuits are installed with safety devices to prevent overcurrent, such as fuse, fusible wire, etc. If the circuit appears overcurrent, these safety devices will be disconnected before wiring harness and electrical equipment is damaged.

Single line connection is the biggest characteristic of automobile circuit. Automobile electrical appliances are all connected in parallel, theoretically requiring a common live line and a common neutral line. The car engine and chassis are made of metal and have good electrical conductivity. Therefore, the use of the car's metal body as a variety of electrical equipment as the common wire, and electrical equipment to the power supply just need to use a wire connection, so called single-wire system.

Although automobile circuits are complex, they are composed of relatively independent unit circuits with different functions. If you read each unit circuit carefully, you will be able to read the whole car circuit.